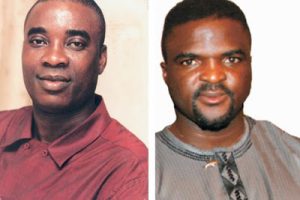 KWAM 1, during a recently organised program by Nigerian Breweries tagged ‘ARIYA REPETE’, was quoted to have said that the late Alhaji Sikiru Ayinde Barrister was not the originator of the genre of music.

According to Obesere, KWAM 1 was in essence trying to stress that he (K1) made Fuji music more pronounced.

This statement has such created buzz on various social media platforms with some criticising the Fuji lord; and others praising him.

But Obesere, when asked about his comment on the matter, disclosed that KWAM 1 goofed by not recognizing the fact that the late Barrister is still known as Mr Fuji.

He, however, noted that the likes of his contemporaries like Ayinla Kollington also did a lot in contributing to the acceptance of Fuji music before their generation geared on.

“He cannot rubbish the great works of late Alhaji Barrister. He is just imagining himself in Barrister’s shoes. If you don’t know something, you find out. As the Yorubas say, if a child does not meet history, he will definiyely be rendered legends.

“Even Alh. Kollington sang that calling oneself the originator is not the issue but God’s blessings over their music careers. So, who is he not to recognize that,” he said.