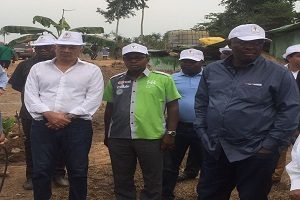 TAAL known as Triton Farm accessed the CACS through Heritage Bank, which is used to set up aquaculture businesses; nursery/hatchery for the production of fingerlings and brood stock in Ikeja and earthen ponds for catfish and tilapia in Asejire, Iwo and Gambari towns in Oyo State.

The Company’s strategy is to embrace backward integration through production of fish locally and reduce its importation of frozen fish and as well to assist small scale farms by producing quality breed fingerlings.

The Minister of State for Agriculture, Senator, Heineken Lokpobiri, during a tour at Triton Farms commended the firm, while stating that the CBN and Heritage Banks’ financial support to the company’s achievement is very fundamental as investment in food security is probably the most profitable venture anyone could think of.

He further stressed on banks to finance more of Agricultural projects than trading, oil and gas etc., as the future is highly dependent on Agriculture.

Awe stressed that Heritage Bank’s support for small scale enterprises is well known and most of these SMEs play in the agric sector.

According to him, the bank sees agriculture as one of its heritage that can empower individuals and communities in terms of creating wealth from the soil and through the entire value –chain using value addition and industrialization.

He further disclosed, “We have supported large corporates such as Triton in expanding their capacity and boosting import substitution, we have also supported exporters that export commodities or processed goods which ultimately conserve scare FX and enhance our balance of trade.

“We are also focused on small holder farmers as we currently support thousands of farmer in Kaduna and Zamfara States in rice and soybeans production under the Anchor Borrowers Programme.

“We are also targeting the youth that are interested in agriculture through our partnership with CBN on Youth Innovative Entrepreneurship Development Programme.”

In his remarks, the Chairman, Triton Group, Ashvin Samtani, said the farm was fully integrated in aquaculture, poultry and crop production and is a platform to create employment for teeming youth.

“Triton Farm is designed to train youth in agriculture and create employment, as well as generate wealth. This is the only farm in the whole region that is fully integrated in aquaculture, poultry and crop production,” he affirmed.