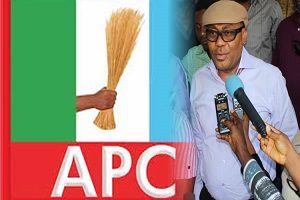 The All Progressives Congress, APC, in Rivers State has berated the ruling Peoples Democratic Party, PDP, in the state under the watch of Nyesom Wike for allegedly engineering and promoting insecurity as a strategy to scare the Independent National Electoral Commission, INEC, from fixing a date for the long-overdue rerun legislative election in the state.

INEC had made it clear that it will not conduct the election unless peace is guaranteed as it is not prepared to risk the life of its officials and the ad-hoc staff to be used for the exercise.

“PDP and Wike are aware that they cannot win any election in a peaceful environment, so they have resorted to the promotion of insecurity to ensure that the rerun legislative election in the state is endlessly delayed so that Senator Magnus Abe, Chief Andrew Uchendu, Rt. Hon. Amachree and other APC candidates does not join their colleagues at the National Assembly to give Nigerians purposeful and visionary leadership direction,” Rivers APC said in a statement issued on Wednesday in Port Harcourt.

The party noted that It is sad and regrettable that Wike has made governance in Rivers State a laughable and comic venture where insecurity is not only promoted, sustained, watered but has become a way of life with murderers and gun wielding youths treated like celebrities.

It said a state where outdated criminals were granted amnesty and accorded heroic receptions and treatments all aimed at scaring and intimidating INEC and Security Organs from performing their statutory roles in the state.

Rivers state now better known as Wike’s ‘Rivers of Blood’ in which the easiest way of becoming a hero and famous is by knowing how to handle an AK 47 rifle and engage in kidnapping and killing after which Wike will list you in his amnesty programme as he did when he granted state pardon to about nine criminals who were sentenced to life imprisonment by competent courts of law, having been found guilty of various cases of killings, the APC said.

The party also cried out over yet another violent attack on Ogoniland, which is one of its strongholds.

It said: “Last two nights, we learnt that Wike and his killer gang attacked a community in Khana LGA, killed four people and burnt many houses. Obviously, this act of barbarism is part of Wike and PDP’s strategy of using violence to intimidate INEC to keep postponing the legislative rerun election.”

Rivers APC unequivocally declared its readiness to contest the rerun legislative election at any time and date, even as it appealed to the Security Agencies to come to the rescue of INEC to enable it conduct the ballot without further delay.

“As much as we sympathise with INEC over the risk that Wike and PDP pose for a peaceful and successful rerun legislative election in Rivers State, we wish to appeal to the Federal Government to as a matter of urgency rescue Rivers state before Wike and his cohorts finally destroy the state.

“Finally, we urge and plead with the security organs not to give up and allow Wike and PDP to frustrate and deny Rivers people proper representation at both the National and State Assemblies,” the party said.