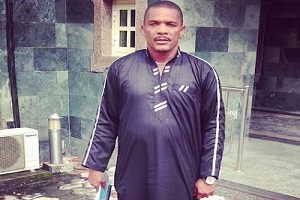 A movie director in Nigeria named Ifeanyi Azodo has been apprehended by the police in Onitsha, Anambra State for alleged robbery.

According to New Telegraph, the Area Commander of Onitsha Police Area Command, Abubarkar Yahaya, who confirmed the incident, was quoted to have said that, “There was a case against him and we just invited him to make statement and we released him on bail because it is a ‘bailable’ offence.

“If you want details of the matter, then go to the state Police Public Relations Officer (PPRO).

“Don’t quote me wrong, I said we had a case reported against him and we invited him for questioning and along the line we found out that he took laws into his hands and in the course of our investigation we found him wanting.

“However, we have recovered about 80 per cent of the missing items in relation with the matter and investigation is still ongoing.”

Asked when police would arraign Azodo, the area commander said that would depend on the outcome of investigation.

But a top police officer told New Telegraph that the owner of a hotel in Onitsha reported the case of robbery against Azodo.

According to investigation, Azodo invited a 30-year-old man into the hotel. During their discussion, there arose a misunderstanding between them which attracted the hotel management who invited the police. The man, who gave his name simply as Stephen, did not speak on the cause of the argument.

When contacted through a text message, Azodo replied: “Ya bro got ur message. Will call u once am done shooting.”

However, Azodo did not call at press time. The PPRO, ASP Nkiru Nwode, confirmed Azodo’s arrest. Nwode said that it was a case of robbery and not hom0seXuality as being rumoured in some quarters.