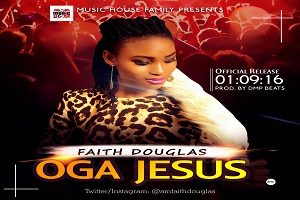 A music label in Nigeria called Music House Family has unveiled its newest artiste, Faith Douglas, who will release her first and official single ‘Oga Jesus’ on Thursday, September 1, 2016.

Faith Douglas was born on January 24, 1994, into a Christian family of Mr and Mrs Douglas Agharehehon of Obagie Community in Orihonwon Local Governmental Area of Edo State.

Her solo life as a singer started at 17 years when she went for Nigeria Idol in 2011 and 2012 respectively.

Since then, Faith Douglas have been maintained her consistency in creating a niche for herself in the Gospel Music Ministry.

In 2015, she hosted her first and very successful worship concert tagged “Before the Throne” which took place at the Niger Delta University where she studied.

The success of this concert grew into fame and paved way for her to be featured as backup vocalist for most singers on campus and out of school. She also contested for an on-campus talent hunt that she came up as second runner-up.

Faith Douglas is very passionate about helping lives and giving hope to the hopeless, for this reason she founded the Transforming Lives Foundation (TLF) which speaks to the minds of those who have given up on life because of situations and life challenges.

The foundation tends to give a voice to the oppressed in the society and restore peace in the lives of the less privileged. The foundation also helps to speak the word of Christ to the lost souls and to direct them to the way of the kingdom of God.

‘Oga Jesus’ is a song inspired by her life and the challenges she had to pass through, at the end everything we have is given to us for free.

If it were our own doing we won’t be able to get what we have but even at our wrongs Christ still looked down and showed us mercy. He showed us that He is God and can never be a man, what other way can we return what He has done than to sing praises unto Him and worship Him with everything that we have got.

‘Oga Jesus’ was produced by DMP who is also the CEO Music House Family, but was written and arranged by Faith Douglas.