Wike Is A Terrible Disappointment—Dakuku Peterside 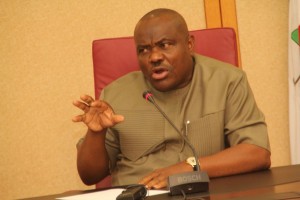 APC governorship candidate in the 2015 elections in Rivers State and current DG/CEO of NIMASA, Dr Dakuku Adol Peterside, has said that no amount of well-crafted and rehearsed lies and cheap media propaganda can sway Rivers people to believe in the current administration of deceit in Rivers State led by Governor Nyesom Wike.

“The verdict of the people is that Wike is a terrible disappointment and a wasted opportunity,” Peterside opined.

Dr Peterside said that it has become clear to all that the present government in Rivers state is unfit to lead Rivers people.

“This government has neglected its most fundamental duty of securing lives and property, has earned the unenviable sobriquet of number one state in kidnapping, has borrowed more money under one year than all previous governments put together yet no single project to show for it; has a penchant for inviting personalities to commission projects executed by the Amaechi administration; legalized extortion and multiple taxation and embarked on endless biometric verification as a ploy to owe workers and pensioners six months salaries and allowances.  No government has ever been as deceitful as the present government in Rivers state.

“Wike is a terrible disappointment on all fronts; he brought back abruptly over 400 students who were on state government scholarship abroad during the Amaechi administration; shut down government model primary health centres and primary schools,” Dr Peterside stated.

The NIMASA DG described Wike as a man who pathologically hates education and wondered how Wike expects a society to progress without its citizens being educated.

“The panacea for this impending doom and generational catastrophe is for Rivers people to vote for APC legislators who will team up with other men of goodwill and rescue Rivers State from misrule, criminality, rascality and exploitation,” Peterside said.

He said the power to liberate Rivers State is in the vote of the people. He recalled telling Rivers people that Wike has no plan on how to run Rivers State but rather poorly copied his road-map to prosperity.