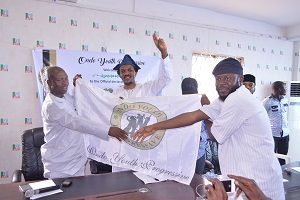 The Ondo Progressive Congress, a youth group under the banner of the All Progressives Congress, APC, on Tuesday, July 26, 2016, stormed the party’s secretariat in Akure to demand inclusiveness for the youths and the adoption of one of them as the gubernatorial candidate of the party.

The youths in their hundreds from the 18 local government areas of Ondo State and led by Comrade Leo Olagbade Adeniran, were received by the APC state secretary and leading gubernatorial aspirant Engr. Tunji Light Ariyomo.

They highlighted their expectations and their determination to ensure that they mobilize support for the APC in the coming election.

The youths also observed that of all aspirants invited to the rally, only Ariyomo turned up.

The atmosphere became excitedly charged when Ariyomo took the microphone to address them assuring them that the party will in its wisdom pick the best candidate that can deliver in office as well as the candidate that offers the best chance at winning the next guber election.

He used the opportunity to commend the “high integrity capital” of President Buhari and warned that only a candidate that the people want can win the coming election as the President is not the type that will bend the rule through rigging and other vices.

Ariyomo further commended the youths for converging in such huge numbers.

In his remark, the APC Chairman, represented by the state secretary, Rahman Rotimi, said the youths must ensure that the Peoples Democratic Party, PDP, is driven out of the state.

Rotimi assured that the APC is committed to providing better life for youths and the entire people of Ondo State.