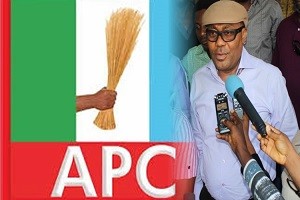 The postponement of the July 30 rerun election in Rivers State by the Independent National Electoral Commission, INEC, has been blamed on the Peoples Democratic Party, PDP.

According to the Rivers State chapter of All Progressives Congress, APC, it received the news of the rescheduling with mixed feelings, adding that their instinctive response is that of huge disappointment considering that it will further deny the people parliamentary representations at both the national and state levels while the pressure on our candidates to sustain their campaigns continues apace.

In a statement issued by the party’s spokesman, Senibo Chris Finebone, the APC said “considering the reasons adduced by INEC for the action, it believes that had members of the PDP led by Governor Nyesom Wike abandoned their official policy of resorting to violence as a tool for seeking political power, the postponement of the rerun elections would have been unnecessary.”

“Indeed, we blame the postponement on the sustained violence and killings orchestrated by the PDP in Rivers State,” the opposition party in the state posited.

It observed that, “The latest of the string of violence the PDP has been perpetrating in the State is the burning down of INEC office in Bori last Friday morning after Wike’s hate speech against INEC and APC leaders a few hours earlier at Okehi.

“Just before the March 19 rerun elections, Wike employed the use of hate speech as his battle cry, calling on his followers to stop Senator Magnus Abe. Days later, the Senator’s campaign office in Bori was bombed and burnt down.

“Last Thursday, Wike was at his game once again. Speaking at his party’s Rivers East PDP campaign rally at Okehi, Etche LGA, Gov. Wike let out his usual battle cry and less than 24 hours later, those believed to be his foot soldiers bombed and burnt down the INEC office in Bori, the South-East senatorial zonal headquarters of Senator Magnus Abe.

ALSO READ  5 Ways To Be Romanic In This Digital Age

“A critical look at the modus operandi of the two bombings reveals close similarities and imprints, suggesting that those responsible for the first bombing most likely undertook the latest arson on the INEC office.

“The APC finds it curious that as soon as the INEC facility was bombed in Bori, the most virulent critic of INEC, Wike, turned around to offer the electoral umpire a Greek gift to the effect that INEC could relocate to the Khana Council.

“It does not call for any strenuous reasoning to conclude that PDP members know more than they are telling the world about the bombing of the INEC office in Bori in order to force the electoral umpire to relocate to a PDP facility.

“Why did Wike not provide the INEC office same security that he says the Council enjoys?

“The APC calls on the Inspector-General of Police, Director-General of the Department of State Services [DSS], the Commissioner of Police, Rivers State Police Command and other security agencies to diligently investigate, fish out and prosecute all those who may have a hand in the spate of killings, arson and violence in Rivers State.

“Wholesome peace must be restored in Rivers State so that violence does not continue to be a reason to deny the people representation in the political milieu.”