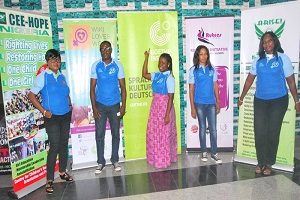 World’s largest encyclopaedia, Wikipedia, is has partnered with non-governmental organisations in Nigeria to bridge the current gender gap. The company noted that it is taking this step so as to highlight accomplishments of women in the society and that Nigerian women would be among the biggest beneficiaries of the partnership.

According to Wikipedia, the new project tagged ‘Wiki Loves Women’, is being implemented by its sister organisations WikiAfrica and Wikimedia Foundation in collaboration with the Goethe Institute (the German government’s cultural foundation).

It stated that the initiative ‘is a multi-country, multi-faceted project aims at encouraging the contribution of contents that celebrate the influence of women leaders, and reflect the realities faced by women and girls across Africa.

It is designed to help bridging two gaps on Wikipedia and other Wikimedia project: Women and Africa.’ This first, 15-month phase is being implemented in four countries of Nigeria, Ghana, Cameroon and Cote d’Ivoire.

Recently, three Nigerian non-governmental organisations (NGOs) namely CEE-HOPE, Arise Nigerian Women and Women of Rubies led by women and women-focused, were selected to have their works and those of fellow women profiled on various Wikipmedia platforms and websites including Wiki Loves Women, Wikipmedia, Wikimedia Commons among others.

At an edit-a-thon event held at the Goethe Institute in Lagos, the three organisations were unveiled. The edit-a-thon continues with the various partners to put the staffers of the organisations through the process of independent posting on Wikipedia platforms.

At an edit-a-thon event at the Goethe Institute in Lagos, the three organisations were unveiled. The edit-a-thon continues with the various partners to put the staffers of the organisations through the process of contributing to Wikipedia platforms. (Quote Florence)

Olaniyan Olushola, Director, Wikimedia User Group Nigeria (WUGN) and the Project Lead, Wiki Loves Women in Nigeria expressed excitement at the novel project: ‘We are glad to see how exciting and how successful this initiative has been so far in Nigeria and the responses of the various organizations,’ he said. ‘We remain committed to the core objectives of Wikimedia Foundation which is making every single person on the planet to have free access to the sum of all human knowledge. In celebrating our women through this process, we are ensuing that no stone is left unturned or gap unfilled,’

The new partnership comes as a result of long-term research by Wikipedia that showed the yawning gender imbalance in representation on the platform which is reputed to have a monthly average of 500 million visitors.

For instance, a 2010 survey showed that Wikipedia’s contributor base has barely 13% per cent women. Another research revealed that only 16% of the biographies on the English Wikipedia are about women (or about 200, 000 women compared to about four million men).

There are also other instances of unveil topical biases that manifest in Wikipedia content, which the project tries to correct by having as many female contributors and focusing on women’s accomplishments, as much as possible.

‘For us at Rubies Ink and Women of Rubies, we believe in the power of celebrating women as well as collaboration and network. Wiki Loves Women has made this easy with its platform, thereby giving every woman a voice and presence both nationally and globally’, said Rubies’ founder, Esther Ijewere-Kalejaiye.

‘The opportunity to increase the visibility of Nigerian women in governance and politics via Wiki Loves Women and its partners is unique to our goal of institutionalizing gender mainstreaming,’ said Abimbola Junaid of Arise Nigerian Women.

ALSO READ  5 Dating Ideas For A Rainy Day In Lagos

For Betty Abah, Executive Director of CEE-HOPE, a child/girl’s right and empowerment NGO, it is a golden opportunity. ‘What other time to showcase the accomplishments and potentials of African women, and to get fellow women involved in the process than now? What other time than now when, in Nigeria for instance, we cannot pass the Equality Bill because many, including our lawmakers, cannot yet grapple the place of women in modern day society? What other time than now to showcase the African woman who against all odds have remained sayers and doers. Kudos to all the Wikipedia for a most golden and definitely, most timely initiative. CEE-HOPE deeply appreciates our selection,’ said Abah.

Florence Devouard, former Chair of Wikimedia Foundation and co-manager of Wiki Loves Women with Isla Haddow-Flood notes that ‘in spite of progress made to address inequalities, there remains a systemic bias against profiling women and the issues they face; the partnership between Wikimedia UG, CEE-HOPE, Women of Rubies and Arise Nigerian Women is a wonderful achievement which empowers a small group of committed citizens to restore balance and make the world a much better place’.