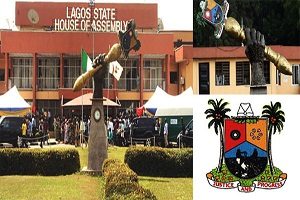 On Wednesday, members of the Lagos State House of Assembly protested against Senator Dino Melaye for insulting the former Lagos State First Lady, Oluremi Tinubu, at an executive session of the Senate last week.

The legislators stormed the National Secretariat of the All Progressives Congress, APC, in Abuja, to register their displeasure over Melaye’s action.

The lawmakers met with the APC National Chairman, John Odigie-Oyegun, in a closed-door meeting to discuss the issue.

According to the demonstrators, who were led by the Deputy Speaker, Wasiu Sani, they are not happy with Melaye because he allegedly assaulted Mrs Tinubu, wife of APC national leader, Bola Ahmed Tinubu.

The Lagos lawmakers claimed Mrs Tinubu, who is representing Lagos Central Senatorial District at the National Assembly, is a woman who respects all the political sons and daughters of her husband.

They alleged that there appeared to be a conspiracy of silence by the leadership of the Senate over the incident, noting that as loyal party members, they could not fold their hands and watch the party’s cherished values of loyalty and respect for leaders being denigrated.

ALSO READ  Lawmaker Decries Use Of Violence As Campaign Strategy

Speaking with newsmen after the meeting with Oyegun, the Deputy Speaker said, “We are here to pay solidarity visit to Senator Oluremi Tinubu, that we condemn the act, she should not be intimidated and she should not yield to verbal assault.

“But let me say this, Senator Oluremi Tinubu, that we know who incidentally was the First Lady of Lagos state between 1999 to 2007 some of us are like sons or brothers to her husband, Asiwaju Bola Ahmed Tinubu.

“In Yoruba land, if you are a son to a woman’s husband, you are supposed to be her son. She respects us and always addresses us as sirs. So, she is a woman that is cautious but she does not take nonsense.”