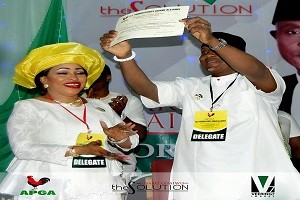 The immediate past Director General of the Peoples Democratic Party, PDP, Governors’ Forum, Earl Osaro Osaze Onaiwu, has emerged candidate of the All Progressive Grand Alliance, APGA, for the September 10, 2016, governorship election in Edo State.

Onaiwu was presented his certificate as the flag-bearer of APGA in Edo State for the gubernatorial poll on Thursday, June 30, 2016.

Speaking after the presentation, Onaiwu promised not to fail the people of Edo State just like the other prominent political parties.

Onaiwu praised his wife for standing by him.

He further said, “It is time to hit the road and campaign. Thank you for all your support. The Solution has come. The Solution is coming. All Glory to GOD almighty.”