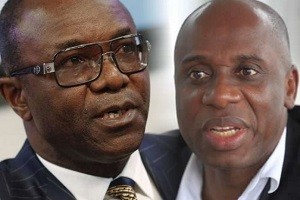 Minister of Transportation, Rotimi Amaechi, has been berated over his comments in Uyo, Akwa Ibom State on Monday, June 13, 2015, that he proposed the scrapping of the Maritime University, Okerenkoko in Warri South West Local Government area of Delta State because the money used to acquire the land was too much.

Amaechi was lambasted for his remarks by the Ijaw Youth Council, IYC, on Tuesday.

The Minister claimed that N19 billion was used to purchase the site of university, but the group said Amaechi was turning the truth upside down in the establishment of the institution which it said would bring development to the Niger Delta region.

The IYC, in a statement signed by its spokesman, Eric Omare, said it is not happy with “Amaechi’s anti-Niger Delta position”, but commended the “Minister of Petroleum Resources, Ibe Kachikwu, for standing with the people of the Niger Delta region and endorsing the development of the region.”

The group said “Kachikwu clearly demonstrated to the world that he is a worthy son.”

“For t records purposes, the group said the permanent site of the university and the land for the site were acquired from the Okerenkoko Community at an amount less than N2 billion.

“After work commenced at the permanent site, the Federal Ministry of Transportation approached Chief Government Ekpemupolo who owned a diving school at Kurutie, another community in Gbaramatu Kingdom to acquire his private diving school to be used as temporary site for the Maritime University.

“It is important to note that this diving school at Kurutue was an existing school with state of the art facilities and structures completely built,” the IYC said.

“The land for the university was acquired for less than N2 billion contrary to Amaechi’s claim. It was the temporary site, which is a completely built up land with structures and world class facilities that was acquired for about N13 billion, which again is far less than Ameachi’s N19 billion claim,” it explained.