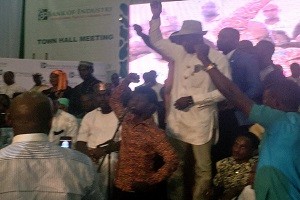 Some angry youths believed to be students in Akwa Ibom State disrupted a town hall meeting organised by the Federal Government to sensitise the people on policies of the government in the last one year.

It was gathered that the youths stormed venue of the programme in Uyo on Monday, June 13, 2016, chanting war song, expressing their displeasure at the government at the centre.

Representatives of the Federal Government at the meeting, Lai Mohammed, Amina Mohammed and Rotimi Amaechi, who are respectively Ministers of Information, Environment and Transportation, were almost attacked by the angry students.

It was learnt that the incident occurred as soon as representatives of the National Association of Nigerian Student, South South Zone was given the microphone to speak.

It was gathered that security operatives were immediately called in to calm the students and bring the situation under control.