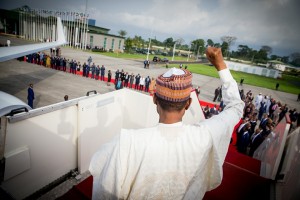 The Greater Together New Media Team, GTNMT, has commended President Muhammadu Buhari and the Minister of Transport, Rotimi Amaechi, for demonstrating extraordinary and sincere commitment to the development of Nigeria, and in particular, the Niger Delta region by insisting that the Lagos-Calabar Rail project be captured  in the 2016 Budget in spite of blistering antagonism from some quarters.

A statement signed by Chairman of GTNMT, Ken Minimal said, “That sacrifice of love and quest for even development for all sections of the country paid-off when, on the 6th of May, 2016, the President finally signed into law the 2016 budget, with the contentious Lagos-Calabar Rail, undoubtedly  one of Africa’s biggest infrastructure projects duly captured and appropriated for in the Budget of Change expected to herald massive capital spending capable of reviving Nigeria’s ailing economy for the benefit of the generality of Nigerians.”

The statement reads, “The economic benefit of the Lagos-Calabar Rail to the people of the Niger Delta is massive. It will open up the area to trade and investment.

“It will employ thousands of young people in the region who daily rummage the streets in search of non-existing jobs. As young people are meaningfully engaged, criminality and other anti-social tendencies that give the region bad name will abate.

“The lives of the people will be more meaningful. And above all, the project will not only engender a sense of belonging in the people, it will also assuage their frustration occasioned by lack of infrastructural development in the region for the last six years.

“Indeed, it will also induce the inescapable understanding that power should not be looked upon as an end in itself, but a means to an end, which is development for the benefit of the people.

“The rail project is routed through Rivers State, and for the first time in six years, the people of the state can look forward to a significant Federal presence/infrastructure befitting the economic status of the state.

“That, essentially, was the reason Amaechi implored people of the state to support President Buhari and the APC during the 2015 election. The State is finally poised to reap bountifully from that great vision of yesterday.

“We salute the courage, stoicism and equanimity displayed by Amaechi, who endured and took in his stride all manner of savage attacks on his person for daring to stand firm in defense of the interest of his people and vision of the President to bring about development that will open up all sections of the country to economic possibilities.

“All great leaders in history suffered similar fate in order to bring happiness and joy to their people. All through the controversy that attended the 2016 budget as it relates to the Lagos-Calabar Rail Project, it was Ameachi’s deep seated love for his people and patriotism that shone through. Today, we have a reason to be proud that we have in you a worthy Nigerian from Rivers State.

“We have no doubt that working closely with President Buhari, the Minister of Transportation will deploy his trademark of aggressive pursuit of people-oriented development project to ensure that the Lagos/Calabar Rail Project achieves superlative execution/implementation to bring succour to Nigerians in general and Niger Deltans in particular.

“We pledge our continued support to the President and Amaechi as they continue to work hard to make Nigerians feel the positive impact of change.”