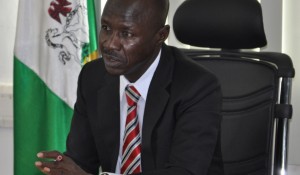 Acting Chairman of Economic and Financial Crimes Commission, EFCC, Ibrahim Magu, has stated that violators of the provisions of the Procurement Act risk five to 10 years imprisonment.

Magu, who lamented the widespread procurement fraud in Ministries, Departments and Agencies, MDAs, further disclosed that civil servants found guilty under the Act might also face dismissal from service.

He was speaking on Tuesday, April 19, 2016 during the EFCC Anti-corruption Sensitization Programme organised for the Federal Ministry of Power, Works and Housing, Magu urged civil servants to familiarise themselves with the procurement Act, adding that EFCC would not spare anyone found to be involved in fraud against the Nigerian people.