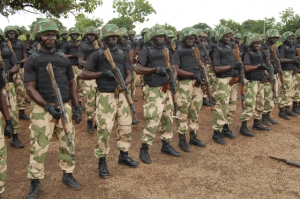 The Nigerian Army says not less than 22 soldiers were injured during an attack by Boko Haram terrorists at Kareto in northern Borno State.

On Monday, the army came under a serious attack from the insurgents, but the Nigerian troops engaged them in a fierce gun battle.

Acting Director Army Public Relations, Colonel Sani Kukasheka Usman, while giving an update of the attack on Tuesday, noted that two officers were wounded as well as 22 soldiers.

He disclosed that “the troops successfully repelled the attack and killed quite a number of the terrorists.”

According to him, “the situation has since been brought under control and reinforcement sent.”

“So far, our troops had two officers and 22 soldiers wounded in action. All of them have been evacuated to Military Hospital Maiduguri where they are receiving treatment,” he added.