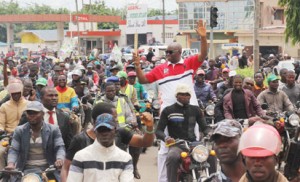 Governor of Ekiti State, Ayodele Fayose, has been described as a threat to national security by the All Progressives Congress, APC, in the state.

The party made this declaration on Monday in a statement issued by the APC Publicity Secretary in Ekiti State, Taiwo Olatunbosun.

According to the opposition party in the state, Fayose’s recent conducts and utterances tilt towards acts of sabotage that could paralyse national institutions.

The party further said the Fayose has denied residents of the state quality leadership they deserve, which it said has brought shame on them.

“We have heard of reports of Governor Fayose inciting the people to stone the operatives of the DSS anywhere they are seen.

“This is besides saying many unprintable things about the President, such as saying that he would soon die, and declaring the DG of DSS, Lawal Musa Daura, a personal non-grata in Ekiti State,” the statement highlighted the alleged sins of the governor.

Furthermore, the APC said, “It is regrettable that Mr. Fayose cannot separate his personal views as a man constantly at war with the Nigerian law from the views of lawful Ekiti people, who are ready to submit themselves to the Nigerian law where the rule of law and good governance flourish.”

The party said Fayose has “robbed Ekiti people the quality leadership with the right mindset to see governance beyond the prism of self-glorification.

“This failure to see governance beyond personal appeal of the governor is costing our state good governance for the development of our people and her deserved place of honour in this country.

“That is why the governor is wasting state resources on helicopter charter to ferry an accused person, Akanni Afolabi, from Abuja to Ekiti after which he took six pages of several newspapers on frivolous adverts to publish court records on the accused’s bail application and topped it with the donation of a new car to same Akanni, who is still under investigation over several criminal cases.”

The APC noted that, “Fayose has appointed himself national opposition leader just because he wants to help himself in his many criminal cases against the nation’s law.”