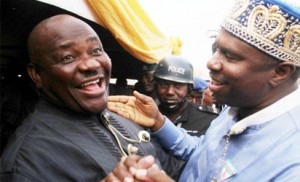 Governor Nyesom Wike has accused his opponent in the Rivers State governorship election in April 2015, Dakuku Peterside of killing an aide to his (Wike) Chief of Staff, Chukwuemeka Woke.

Wike, while addressing journalist on Sunday, said Dakuku, who is the Director General of the Nigerian Maritime Administration and Safety Agency, NIMASA, used his security aides to open fire on Woke’s aide.

The governor, who was speaking with journalists on the rerun elections held in the state on Saturday, said the All Progressives Congress, APC, may have the Federal might, “but we have the people.”

According to Wike, the polls have clearly shown “who is on ground and who is accepted by the people.”

“The rerun elections have proved that the control of INEC, Federal might, military, police and other security agencies cannot not translate to electoral victories as the people will always resist agents of rigging,” the governor declared.

The governor noted that it was unfortunate that the military has been reduced to this level when they will be used against public interest.

He said the number of military men unleashed to intimidate and harass Rivers people is regrettable as they failed to tackle security challenges.

On the conduct of the rerun legislative elections, Governor Wike maintained that INEC was not prepared in terms of logistics and planning.

On the issue at the Mile 1 Police Station, the governor said that Mrs Ekwi Adebisa is the girlfriend of the APC Candidate for the Port Harcourt Federal Constituency who framed her abduction alongside APC leaders.