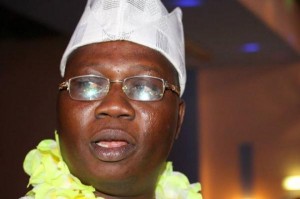 ***Say Adams is a disgrace to Yoruba culture
Some leaders of the Oodua’ Peoples Congress, OPC, expelled from the group weeks ago have accused the National Coordinator, Gani Adams of financial impropriety.

They urged the President Muhammadu Buhari led government and the Economic and Financial Crimes Commission, EFCC, to probe Adams and some of his aides like Ogunshola Olugbade and Femi Felix, who they called his fronts.

One of the accusers, Maruff Olanrewaju, who Adams removed as the OPC Kwara State Coordinator, told newsmen at a press briefing in Ilorin on Sunday that, “We call on President Muhammadu Buhari and the EFCC to investigate all Gani Adams banks accounts; Ogunshola Olugbade’s account as well as Femi Felix account from February to November 2015.

Speaking further, Olanrewaju disclosed that, “Moreso, President Muhammadu Buhari-led administration should give very closed monitoring to the bank and industry sectors because how can someone within a month save more than a billion in an account without any alarm from the bankers?”

“Just of recent, you are all living witnesses when a former President of Nigeria, Chief Olusegun Obasanjo went to Oni of Ife, he prostrated flatly before Oni. But when Gani Adams went, he just bowed his head with handshake to Oni. That is disrespectful.

“Adams is a disgrace to Yoruba culture. When you are promoting culture and you cannot bow in front of one of the most highly respect Oba in Yoruba land that is unacceptable.”

Olanrewaju, flanked by other state coordinators also booted out recently, further accused Adams of receiving N9bn from Jonathan’s government allegedly to destabilize the Yoruba race as well as allegedly received take off grant from Jonathan for pipe-line surveillance contract which OPC members executed only to allegedly deceive the OPC members who he said actually executed the contract that the contract money had not been paid.

He also said Adams has mapped out plans to cause trouble in Kwara State with the help of some hoodlums.

“Adams promised our members that if Jonathan released money, each member will get between N200,000 and N250,000 as empowerment. When Jonathan released N1.6bn through Musiliu Obanikoro, for that empower, there was nothing to show for it.

“He should explain how Jonathan’s money was spent. Before the election, there was a publication by a former National Publicity Secretary of the All Progressives Congress now Minister of Information and Culture, Alhaji Lai Mohammed that Adams had collected N9bn from Jonathan to disorganize the Yoruba race. We denied that but later we came to the realization that truly he collected the money.

“Adams should explain how Jonathan’s money was spent. We demand immediate reaction to the allegation of $22m Gadaffi money. He should show to the world the registration certificate of Olokun Festival Foundation, Oodua Economic Empowerment Initiative and that of Oodua Voice Radio,” Olanrewaju narrated.

Those at the media conference were Adeagbo Musediq, Rotimi Akinsonwon, Lateef Oshodi, Sunday Bankole amongst others.

However, one of the aides of Adams, Prince Akanni Segun Olalekan, asked Olanrewaju why he refused “to honour the calls of the National Coordinating Council members of OPC when they invited him to Lagos since December 2015 to clear himself of allegations of fraud from his members.”