NDA Probes Torture Of Man By Cadets In Viral Video 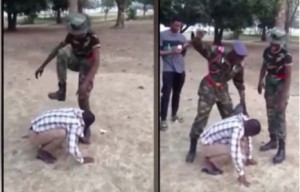 The Nigerian Defence Academy, NDA, says its attention has been drawn to a trending video which shows a female cadet torturing a man, who complimented her beauty.

Disturbed by the outraged that followed the visual, the Academy says it is investigating the matter, pointing out that the incident took place in Lagos in 2014.

ALSO READ  Lagos Too Big For Agbaje To Govern—Fashola

In a series of tweets via its Twitter handle on Thursday, the NDA said as a responsible organization, it would not tolerate the maltreating of civilians in whatever guise.

“The attention of the Nigerian Defence Academy has been drawn to a trending video showing cadets beating some persons. Please note that NDA is investigating the incident.

“Preliminary investigation has confirmed the incident to have occurred in 2014 somewhere in Lagos while the cadets were on break.

“NDA as a responsible institution saddled with task of producing future military leaders will not in any way tolerate such unruly and flagrant mistreatment of Nigerians.

“The NDA under current leadership has addressed most disciplinary loopholes. Further investigation is continuing,” the Academy said in the posts.