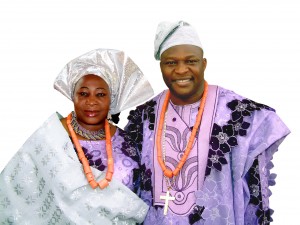 On Thursday, October 8, 2015, at a well-attended press conference held at his multi-million Naira church in Ikeja, Lagos, the revered man of God, who described himself as a violent preacher, revealed activities leading to his 50th birthday celebration that comes up on Saturday, December, 12, 2015 inside his 100 hectare Royal City in Otta, Ogun State.

The Bishop, who was born into the family of Pa Enweliku Samson, a mason from Delta State and Madam Eunice Enweliku Samson about 50 years ago in the ancient town of Ile Ife, Osun State, narrated how he struggled with poverty while growing up.

The flamboyant man of God further said that he never allowed his humble background to affect his destiny, reiterating that the death of his father because his family could not afford N2,000 for his medication, inspired him to be successful in life.

Bishop Tom also narrated how he went through school in his university days without textbooks or handouts, but managed to see life through the then Bendel State University, where he bagged a degree in Biology Education.

He said his wife, Apostle Lanre Samson, who initially left him in the 80s because he was not born again, has stood by him since they got married some years ago. He described her as his jewel, a good preacher and an astute administrator. Coincidentally, both of them will be celebrating 50 years birthday on the same day.

According to the man of God, he finally gave his life to Christ in 1985 and in 1986 when he joined the Campus Youth for Christ, a Christian fellowship in Ekpoma, while in his 100 level.

But as fate would have it, he moved to Abraka campus of the same University and started Christ Royal Family campus fellowship. At Abraka, he was known as Violent Tom because of his zeal, energy and aggression in soul wining, especially with the way he involved the hideouts of cult groups and some hinterlands in the Niger Delta region.

After graduation, contrary to his desire of becoming a business man, God told him to preach the good news and that he should move to Lagos. He obeyed and Christ Royal Family campus fellowship transformed to Christ Royal Family Church with the mandate to set the captives free and teach them to reign over life’s circumstance.

The man of God is well-travelled and has preached in the United States of America, Europe, South Africa, United Kingdom and West Africa. He also boasts of an eye-popping 40 feet Hummer Limousine he cruises around town.

His Tom Samson Foundation caters for the less-privileged in the society and organises vocational skill training programme for mostly women.
In his remarks, the Chairman of the organizing committee for the birthday, Deacon Iyke Kanu, while highlighting the activities lined up for the celebration said, “Because it’s the 50th birthday of our great bishop, we have put in place several committees to work effectively to make the day a glorious one, the plan is to have a carnival-like birthday party that will continue to reverberate even so many years after because we will be using the occasion to reveal the body of Christ, to let the world know what Christ can do, using the celebrant as a case study.

“Bishop Tom Samson came to Lagos as nobody, but held onto Christ, but today the world is celebrating him. His life has been one amazing inspirational tale that will definitely give hope to many people and we are leaving no stone unturned in making it a good avenue to touch lives and showcase God’s wonder.

“Some of the activities lined up for the birthday bash include a novelty football match, the launching of his books and biography, we are prepared to host the world.”