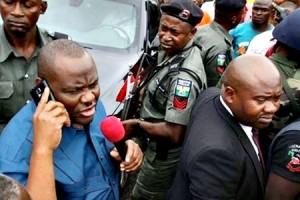 The Rivers State Governorship Election ‎Petition Tribunal sitting in Abuja has cancelled the election of Nyesom Wike as governor of the state.

At the sitting on Saturday, the Tribunal, headed by Justice Suleiman Ambrousa, opined that the poll conducted by the Independent National Electoral Commission, INEC, in April 2015 that brought Wike into power was marred by violence.

Based on this, the Tribunal annulled the election and ordered the INEC to conduct a fresh governorship election in the state within the next 90 days.

Wike contested in the election under the Peoples Democratic Party, PDP, and was declared winner by the electoral umpire, INEC.

However, his opponent, Dakuku Peterside of the All Progressives Congress, APC, challenged the victory of Wike at the Tribunal.