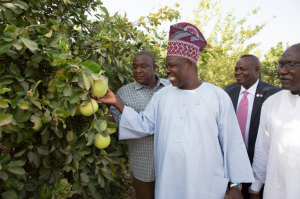 Ogun State governor, Ibikunle Amosun, has reiterated his administration’s commitment to diversify the economy of the state and create wealth for its people.

Amosun made this known while receiving Atsuko Toda, Country Programme Manager of the International Fund for Agricultural Development (IFAD) Value Chain Programme in his office on Friday at Oke Mosan, Abeokuta.

According to him, “Agriculture is the only option that we have. There is no other way to go. We have no other option. We also need to process and add value.”

He also recalled that as a nation, Nigeria’s economy was doing very well when the country depended solely on agriculture as its mainstay.

In his words, “Our nation was doing well and in fact feeding itself when agriculture was the mainstay of the economy but things have not remained the same since the advent of oil. We have not been able to create wealth for our people. We must go back to the basics- large scale agricultural production.”

He also promised to ensure the development of value chain addition to agricultural production in Ogun State adding that this is one area in which the state clearly has comparative advantage.

The governor had earlier highlighted this same fact while speaking at the just concluded 21st Nigerian Economic Summit Group, NESG meeting held in Abuja on Wednesday.

The Ogun State governor also affirmed his administration’s readiness to increase rice and cassava production in commercial quantities and for export.

“We have a huge market in Ogun, Lagos and indeed the whole of the West African sub-region,” Amosun said.

He noted that his administration will not renege on its agenda of embarking on increased agricultural production that leads to industrialisation through optimal utilisation of the value added chain that agriculture offers.

The governor appreciated IFAD for its support over the years and promised that the state will play its part to ensure a very lucrative venture that will better the lots of the people.

Speaking earlier, Toda highlighted some of the achievements of IFAD in 2014 while working in collaboration with the Ogun State Ministry of Agriculture.

She said IFAD is already working in partnership with the Ogun State government in 2015 to support 1,500 farmers, establish 2 to 3 irrigation sites, construct 20 kilometres roads to farm sites, build storage and warehousing facilities among others.

“I believe in the global brand called Ofada rice. I love Ofada rice and we are already sensitising farmers to the opportunities that exists in this respect,” Toda said.