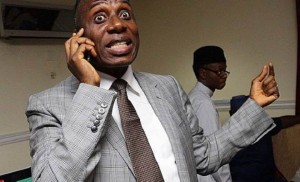 The grilling of the immediate governor of Rivers State, Rotimi Amaechi, may not eventually hold on Wednesday, October 14, 2015 as earlier scheduled.

According to information reaching us, the report of the Senate Committee on Ethics and Privileges and Public Petitions, which looked into allegations raised against Amaechi has not been put together.

This, we learnt, may force the Senate not to call Amaechi for questioning as required by the Nigerian Constitution.

Chairman of the Committee, Senator Samuel Anyanwu, informed his colleagues in the Senate on Wednesday that the report of the petition against Amaechi’s nomination as minister was not ready. He explained that the screening exercise on Tuesday made it impossible for the committee to put the report together.

However, Senate President, Bukola Saraki, directed the committee to ensure that the report is ready on Thursday.