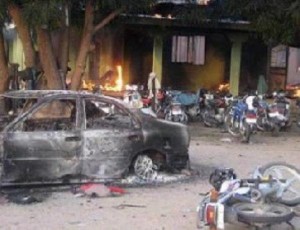 A housing estate in Damaturu, the Yobe State capital was on Wednesday morning bombed by some suspected terrorists.

The Yobe State’s Emergency Management Agency, SEMA, confirmed to the media that about 16 persons were feared dead in the attack.

The incident, which occurred in the early hours of Wednesday, October 7, 2015, was allegedly carried out by members of Boko Haram sect.

It was gathered that the bombing, which happened at the Buhari Housing Estate in Damaturu, was carried out by three teenage boys at a mosque inside the estate.