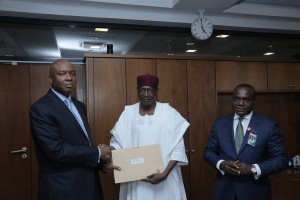 The much awaited ministerial list of President Muhammadu Buhari was finally sent to the Senate on Wednesday evening. This was after the upper chamber had closed for the day and week and to resume next Tuesday, October 6, 2015.

The lawmakers would have sat on Thursday, October 1, 2015, but for the public holiday declared to observe the country’s Independence Day today.

The ministerial list was handed over to the Senate President by Chief of Staff to President Buhari, Abba Kyari, and his Special Adviser on National Assembly (Senate) Senator Ita Enang.

But the Senate President, in a statement, disclosed through Special Adviser on Media and Publicity, Yusuph Olaniyonu, that names of the ministerial nominees would be read before the Senate next Tuesday.

The nominees would be screened by the red chamber of the National Assembly before portfolios would be given to the finalists.