Messi Injured, Out For 8 Weeks 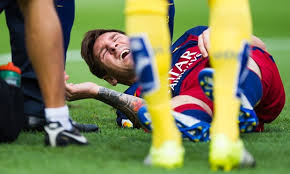 Barcelona’s playmaker, Lionel Messi, will be out of action for eight weeks, the Spanish club has confirmed.

The Argentine hobbled off the field of play on Saturday afternoon in a La Liga match against Las Palmas, which they won by 2-1.

“Tests have confirmed that Leo Messi suffered a torn internal collateral knee ligament. The estimated time out will be seven to eight weeks,” Barcelona said in a statement on Saturday.

Messi was injured while trying to slot in a goal in the first half. He was replaced by Munir El Haddadi after being taken off.

However, Luis Suarez’s brace gave the Catalan giant a comfortable win over their opponent after a 4-1 humiliation in the hands of Celta Vigo. 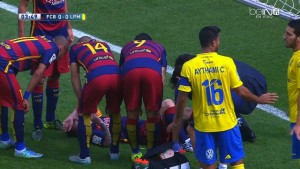