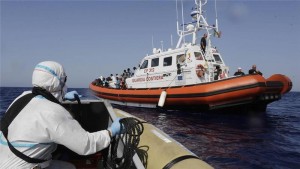 Refugees numbering almost 4,700 were rescued off the coast of Libya by Italian coastguards, a statement has disclosed.

They were rescued on their way to reach the country for a greener pasture. Several Africans have embarked on this deadly in a quest to escape poverty that has ravaged some African countries.

The statement by the coastguard revealed that it had coordinated 20 rescue operations involving numerous vessels which picked up 4,343 migrants from rubber boats and barges. In one of the inflatable boats, a woman’s body was found.

Another 335 people were picked up as part of a rescue mission coordinated by Greece and were being directed to a port in Italy to disembark.

The rescues were carried out by vessels from the Italian coastguard and navy, humanitarian agency Doctors Without Borders, the Malta-based Migrant Offshore Aid Station, a merchant boat, a Croatian vessel under the European Union’s Triton rescue mission and naval ships from Germany and Britain under the EU’s EUNAVFOR Med mission.

Tens of thousands of people, mainly from Africa and the Middle East, have tried to cross the Mediterranean this year, often dangerously packed into small vessels unsuitable for the voyage.

Europe is struggling to cope with a record influx of refugees as people flee war in countries such as Syria, and the Mediterranean has become the world’s most deadly crossing point for refugees.