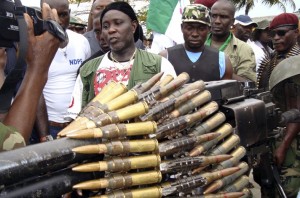 Nigeria’s major opposition political party, the Peoples Democratic Party, PDP, has come under severe attack from the National Coalition of Niger Delta Ex-Agitators, NCNDE-A over what the group described as the frivolities of a party at the verge of extinction adding that the party was celebrating frivolities.

The group made this known through its National President, Israel Akpodoro, after a meeting of the Niger Delta ex-militants in Yenagoa, the Bayelsa State capital ‎over the weekend.

According to the group, the PDP, through its spokesperson, Olisa Metuh, has been engaging in “imaginary war” with the ruling All Progressives Congress, APC-led central government without cause.

The coalition noted that the umbrella party ought to bury its head in shame rather than insulting the sensibilities of Nigerians further in its baseless critics of the ruling APC administration.

To the group, the “Olisa Metuh-led propaganda machinery” should rather tell Nigerians the truth about the misfortunes brought upon the citizenry in the PDP’s sixteen years of maladministration occasioned by wanton corruption, nepotism, gangsterism, tribalism, impunity and outright looting of the peoples’ commonwealth of the people.

Akpodoro noted with regret that the people of Niger Delta wasted their “God given opportunity to rule Nigeria” in the poor leadership ‎provided by the Goodluck Jonathan’s administration lamenting the effrontery of what he described as the remains of the PDP through Metuh at “harrasing the psyche of the Nigerian people in his vitriolic against the service oriented APC administration.

ALSO READ  How To Develop Interest In Mathematics—Expert

In less than two months, the group stated that the Buhari administration has added over $2bn to the foreign reserve as against the daily depletion of same under the ‘kleptomaniac’ rule of Jonathan.

According to the group, the PDP left the Nigerian people in despair, in total darkness, human distress, economic distress, security distress, and intellectual distress, yet, the umbrella party shamelessly complains daily.

Metuh and his co-travellers the Coalition stated should tell Nigerians what happened to the missing billions from the vault of the Nigeria National Petroleum Corporation, NNPC, what happened in the power sector, the East-West Road, ‎the Amnesty Program amongst many others.

Under the PDP, the group further stated that Nigerians knew all forms of reckless corruption, impunity, maladministration ‎saying, even those without shoes in their school days left Aso Rock as private jet owners wondering; “how would the PDP explain to Nigerians that a man saddled with the responsibility to manage the amnesty program under Jonathan’s misrule own an airline today? Metuh and his torn umbrella party should not provoke Nigerians further.” Akpodoro stated adding that the people of Nigeria were pleased with Buhari’s pace of governance.