Much has been said and written on the activities of the Senate President, Dr Bukola Saraki, but one story that has consistently escaped from the public glare is the alleged romance between the new lord of Kwara politics and the controversial Kogi-born actress, Lola Alao.

According to a reliable source, the romance between the duo, which started about four years ago, was so hurt that Lola didn’t hesitate to ask the young man based abroad, who she just got married to then, to take a walk.

The source disclosed that Lola Alao got introduced to Bukola Saraki by one Lekan Olaosebikan, a young merry-go-lucky guy from Oro-Ago, Kwara State.

“What was supposed to be a one night affair suddenly developed to a full-blown romance, Bukola got stricken by the Cupid arrow of love that he started sending return tickets to Lola to visit him in Abuja and Ilorin, Kwara State. He also lodged Lola in one of the best hotels in Abuja and spent quality time attending to her needs not minding the fact that Lola was married then,” said the source.

Another source in the know of the romance told First Weekly Magazine exclusively that the lover-boy, Senator Bukola Saraki spared no cost to make Lola happy.

“They both traveled abroad together in the VIP class on international trips and I can tell you that it was the Senator that bought a house for her in the highbrow area of Magodo and also got a first rate interior designer to put the duplex in the type of shape that is “royally befitting,” that was the order given to the decorator,” said our source.

Saraki also bought the actress a brand new jeep to cap it all, with all these shower of love and affection, Lola’s head got turned away and she told her husband of just one year, Olawale Ajibola, who is based in the United States of America, that she wanted to opt out of the marriage.

It will be recalled that Lola Alao was once married to one Dare Ogunlade. Lola later met and married America-based Olawale Ajibola, this marriage did not last long as Olawale complained that Lola did not show enough commitment to the relationship and those in the know revealed that he actually got wind of his wife’s romance with Saraki and confronted her, but that instead of denying, she told him to get lost and Wale decided to pay her back by going after a close friend of her known as Becky and in no time, they got involved and moved on to Canada.

While the two marriages Lola had contracted left her with virtually nothing apart from her 11-year-old daughter, Omowunmi, the romance with Bukola Saraki is said to have brought her tremendous wealth. 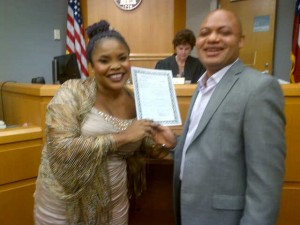