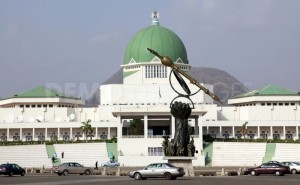 Members of the Nigeria’s upper chamber of the National Assembly are currently holding a closed-door meeting in Abuja.
Also, their counterparts in the lower chamber are having a secret meeting too.
The Senate and the House of Representatives resumed sitting on Tuesday morning at their different chambers.
It is not certain what they would be discussing at the closed sessions, but we learnt that the lawmakers would discuss issues affecting them.
Also, a source hinted Approko247 that the unpaid salaries of some workers in some states will be discussed, while the call for bailouts by some state governors is part of the agenda.
The emergence of Bukola Saraki as Senate President some days ago generated reactions from his political party, the All Progressives Congress, APC.
Last week, Saraki led few of his other members to former president Olusegun Obasanjo at his home in Ogun State. It was gathered that the meeting was to use Obasanjo to pacify President Muhammadu Buhari to recognize the leadership of Saraki.