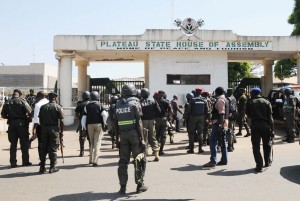 A rescheduled election in the Plateau State House of Assembly produced a lawmaker from the minority party in the Assembly as Speaker.

The new Speaker of the Plateau Assembly, Peter Azi of the All Progressives Congress, APC, representing Jos North-West, was elected to the position on Wednesday by his colleagues.

Earlier on Tuesday, the Assembly was postponed after an election stalemate between Azi and the former Speaker, Istifanus Mwansat of the Peoples Democratic Party, PDP. Both of them scored 12 votes each from the 24 lawmakers in the Assembly.

The PDP commands 13 members, while the remaining 11 belongs to the APC.

But on Wednesday, Mwansat stepped down for his opponent, who was later voted unopposed as the Speaker.

Mwansat later told journalists that he withdrew from the race in the interest of the state.

However, the position of the Deputy Speaker was grabbed by Yusuf Adamu Gagdi of the PDP, representing Kanam-Kantana Constituency.

He polled 13 votes, while his rival, Amos Vongtim Kumtul, also from the PDP, representing Langtang North central, got 11 votes.