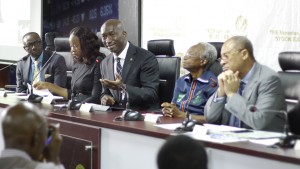 The Committee Encouraging Corporate Philanthropy, CECP-Nigeria, has concluded plans to ensure that the 2015 edition of the National Cancer Week, NCW, is successful and makes a positive impact in the fight against cancer in the country.

Speaking at a press conference held on Wednesday, April 22, 2015 at the Lagos office of the Nigerian Stock Exchange, NSE, the Executive Secretary of CECP-Nigeria, Dr Abia Nzelu, disclosed that different activities have been lined up for the 2015 NCW.

She explained that the NCW is an annual advocacy and fund-raising week for the ‘big war’, which begins from the first Sunday in June every year; a day set aside to mark the International Cancer Survivors Day all over the world, ends on the second Sunday in June.

According to her, this year’s NCW will commence on June 7, 2015 and end Sunday, June 14, 2015, at an event tagged Banquet of Stars Vs Cancer, which will be hosted pro bono by Eko Hotel and Suites, Lagos under the auspices of the Hotel and Personal Services Employers Association of Nigeria, HOPESEA.

Also speaking at the occasion, Bola Adeeko, Chief of Staff /Head, Corporate Division of NSE, and Mrs Cima Sholotan, Head of CSR NSE, said the NSE came on board in the ‘Big War Against Cancer’ because the organisation, though primarily an economic institution, views the creation of wealth in the wider sense which includes the promotion of the well-being of the NSE community and society at large.

They pointed out that as part of the count down to the NCW, the NSE is organizing a corporate challenge for listed companies and the capital market community.

Adeeko and Sholotan explained that the NSE Corporate Challenge is annual 5 km race designed to raise funds for the Big War Vs Cancer in Nigeria and it comes up on Saturday, May 16, 2015 at Onikan Stadium (arrival: 6:30am). Proceeds will be donated towards the national drive aimed at providing Mobile Cancer Centres across Nigeria.

Companies were encouraged to register a minimum of one team of five people and the registration runs from Monday, April 6 till Friday, May 8, 2015.

Details of the activities of the NCW are as follows: 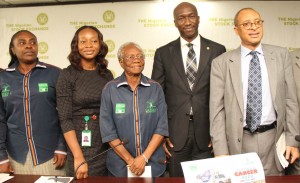 It is co-promoted by six of the core bodies of the organized private sector including, Nigerian Stock Exchange (NSE), Lagos Chamber of Commerce & Industry (LCCI) and Nigerian Institute of Management (NIM).

Cancer is the number one killer disease of mankind. The worldwide burden of cancer doubled between 1975 and 2000 and is set to double again by 2020 and nearly triple by 2030. It is projected that by 2030, one out of every two persons will be diagnosed of cancer in their lifetime.

In contrast, deaths from infectious diseases like HIV/AIDS will decline by 7 million every year.

Every year over 100,000 Nigerians are diagnosed with cancer, and about 80,000 die from the disease. The Nigerian cancer death ratio of 4 in 5 is one of the worst in the whole world. Cancer and the nine related diseases kill more people than all other causes of death in Nigeria.

Cervical cancer, which is virtually 100 per cent preventable, kills one woman every hour in Nigeria and breast cancer now kills 40 Nigerians every day (compared to 30 daily in 2008).

Cancer can affect anyone, irrespective of age, sex or social class; some children are born with cancer

About 70% of cancer deaths take place in poor countries due to lack of infrastructure to deal with the problems, while only 5% of global resources for cancer are spent in developing countries.

Nigeria has the twelfth lowest life expectancy in the world and has no Mobile Cancer Centres, which means most Nigerians do not have access to basic cancer screening.

In the absence of CCC, most Nigerians have no access to optimal cancer treatment.