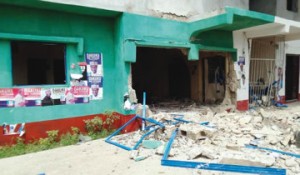 Some unknown arsonists, on Sunday, brought down the office of the All Progressives Congress, APC, in Rivers State.

The incident occurred around 3am at the party’s secretariat in Abam Ama, Okrika local government area of the state.

It was said that the arsonists threw some explosives into the three-storey building, which brought it down.

Police in the state have confirmed the attack.

Speaking on the incident, the APC chairman of in Okrika described it as “a deliberate provocation by our opponents, the Peoples Democratic Party, to draw the APC into a battle that could destabilise our LGA.”