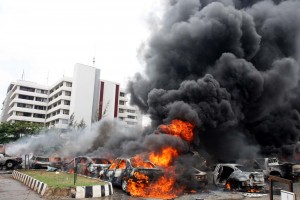 A double explosion has occurred in a busy market in Potiskum, a major town in Yobe State.

The incident happened at the market on Sunday, but human casualty figure cannot be ascertained as at the time of filing this report.

Our reporter gathered that two bombs went off at the market, which affected some buildings around the area.

It is still not certain if members of the Islamist sect, Boko Haram, are responsible for the latest bomb explosions.

Yobe is one of the three states under emergency rule.