Lagos Too Big For Agbaje To Govern—Fashola 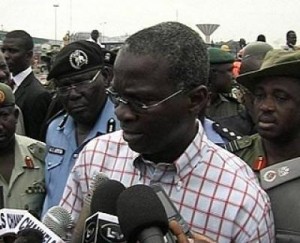 The governor of Lagos State, Babatunde Raji Fashola (SAN), has said that it would be a disaster if the state is handed over to the opposition.

Fashola, speaking on Tuesday in Ikeja at a Town Hall meeting with artisans and tradesmen in Lagos, urged them (artisans) to vote for the candidate of the All Progressives Congress, APC, Akinwunmi Ambode, at the gubernatorial election in 2015.

ALSO READ  Why PDP Is Losing Members To APC--Ribadu

He told them that candidate of the Peoples’ Democratic Party, PDP, Jimi Agbaje, lacks the experience to govern the state.

The governor boasted that Ambode can be trusted to govern Lagos State and continue from where he (Fashola) stops, saying that the APC candidate has the needed experience to do so, having being in government for over two decades, as against PDP’s candidate, who he said has no experience in governance.

Fashola said PDP wants to do a trial and error with Agbaje, and warned that it could turn out to be a disaster if they are voted in.

The governor thanked the artisans and tradesmen for their support for his government in the last eight years.