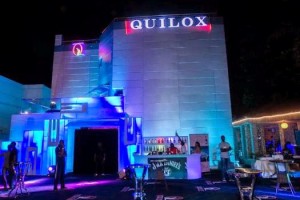 Friday, December 20, 2014 will not be easily forgotten by operators of celebrity fun spot in Lagos called Quilox. The club is always beehive of activities and celebrities love to hang out at the place.

Just when some night crawlers were having fun over the weekend, a fire broke out, which destroyed some properties, but no life was lost.

It took hours before fire fighters arrived at the scene of the inferno and they ensured that the fire was put out and the situation brought under control.

Night crawlers at the club when the fire started initially thought it was a bomb explosion and ran for dear lives.

Quilox is owned by Shina Peller and the club is believed to be the most expensive in Lagos.