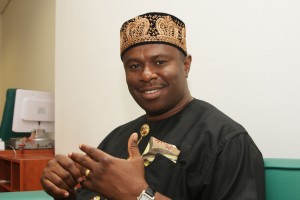 The governorship candidate of the All Progressives Congress, APC, in Rivers State, Dakuku Adol Peterside, has run to God to commit his mandate to Him.

The move was tagged ‘Together In Praise/Dedication Of Mandate Of Dr Dakuku Peterside’.

Dakuku will go in a stiff battle with candidate of the Peoples’ Democratic Party, PDP, Nyesom Wike at the 2015 gubernatorial poll in the state. He will be hoping to beat the former Minister Education.

Rivers State chapter of APC, in a statement issued on Sunday and signed its Publicity Secretary, Chris Finebone, commended the initiative.

The party said, “Indeed, we are happy that this special dedication to God underscores what the Holy Book says in Proverb 16, verse 3: ‘Commit your work to the Lord, and your plans will be established.’

“The APC in Rivers State believes that while the other people boast in chariots and in horses; we will boast in the name of the LORD our God alone.”