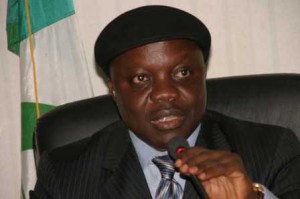 Governor of Delta State, Emmanuel Uduaghan, has said he will represent the people of Delta South Senatorial District at the National Assembly in 2015.

At the secretariat of Delta State chapter of Peoples’ Democratic Party, PDP, in Asaba on Thursday, Uduaghan said he would ensure his people are well represented at the National Assembly when elected.

The Governor was speaking in Asaba while submitting his expression of interest and nomination forms at the party’s headquarters in the state.

He further said, “History is in the making and I have to heed the calls of my people who have severally urged me to go to the Senate after my tenure as Governor of Delta State. I will not disappoint them.

“I will, by the grace of God give my senatorial zone quality representation. I also want to appreciate President Goodluck Jonathan and assure him that I will put all my National and International reach at his disposal.”