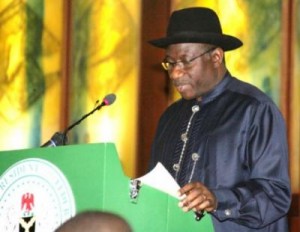 There are strong indications that President Goodluck Ebele Jonathan may formally declare his intention to contest in the 2015 Presidential election today. He is expected attend the Transformation Ambassadors of Nigeria, TAN, rally on Saturday, 18 October 2014, at the Eagle Square in Abuja.

TAN is a pro-Jonathan group wooing Nigerians to give the President another chance to rule the country. The group has purportedly secured millions of signatures endorsing Jonathan for a second term in office.

It was reliably gathered by Aproko247 that the President may eventually declare his interest in the Presidential poll, few days after his perceived major contender for the same position; General Mohammadu Buhari, announced his willingness to contest in the election under the platform of the All Progressives Congress, APC.

Aproko247 was informed by a top shot in the Peoples’ Democratic Party, PDP, that some senior officials of the party would be at the rally on Saturday. Security is Abuja is water tight ahead of the TAN rally.

The Abuja rally will wrap similar ones already held in major cities in the six geo-political zones in the country.