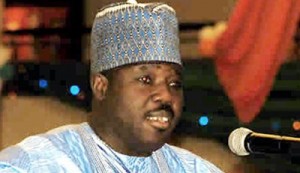 A chieftain of the All Progressives Congress, APC, Ali Modu Sheriff, has left the party to pitch tent with the Peoples’ Democratic Party, PDP. Sheriff, a former governor of Borno State, was received by a mammoth crowd in Maiduguri, Borno State capital, on Monday afternoon.

Several supporters of the PDP gathered at the airport to welcome the former governor to the state and he was cheered to his residence at Giwa Barracks Road, where he spoke with journalists about his defection from APC to PDP.

He alleged that APC, which is the ruling party in Borno, is centred on one man and also stated that the party has no foundation. “APC has no solid foundation, a party cannot be built around an individual,” he told newsmen on Monday.

Sheriff has been accused in the past for being behind the dreaded terrorist group called Boko Haram, which is against Western education, where it derived its name.

He noted that consultations are still ongoing, promising that “after Ramadan, we will come back and pull our people out of APC.”