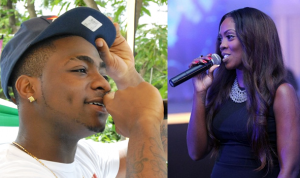 Nigerian music has continued to be recognised internationally by reputable award platforms like MTV, BET, Channel O and many others. In most functions today, Nigerian songs are the preferred to that of their foreign counterparts, which in the 90s and early 2000, enjoyed favourable airplays.

The organisers of BET (Black Entertainment Television) Awards have nominated the duo of Tiwa Savage and Davido for this year’s edition.

The superstar singers were nominated in the ‘Best International Act: Africa’ category alongside four others African acts. Those that would be competing with the Nigerians are Mafikizolo from South Africa, Diamond Platnumz from Tanzania), Toofan from Togo and, Sarkodie from Ghana.

Nigerians have won the last two editions of the coveted award. In 2012, Wizkid won picked the award in the ‘Best International Act: Africa’ category and Ice Prince in the same category in 2013.