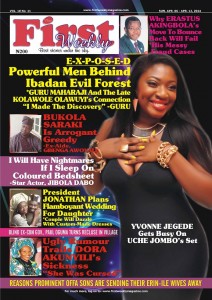 The age long feud between the ancient town of Offa and their closest kiths, the Erin-Ile, people, both in Kwara State, is now ruining the homes of prominent sons and daughters of the two communities.

According to our investigations, the latest judgment of the Supreme Court on the 24th of March, which sent the people of Erin-Ile into wild jubilation when the Apex Court affirmed that Erin-Ile’s land encompasses where the Offa Poly is located and even one of the most historical and cultural places, Idi-Ogun, was also ceded to Erin-Ile in the judgment.

This judgment, coming on the heels of the fratricidal war, which took place between the two communities in 2013, is not being taken lightly, especially by the people of Offa, who we gathered have vowed not to cede any part of their land to any community under any guise.

A source told us that the community has been holding meetings to plan on how to protect what they claim is rightfully theirs.

ALSO READ  Olajumoke And The Hypocrisy Of Our Shared Humanity, By Steve Aborisade

“The plan is to keep our game plan close to our chest, we don’t have to carry arms like some people to achieve our goals,” a prominent Offa indigene told us last week.

As a result of this dogged position, we learnt that some of the people of Offa are now sending their Erin-Ile wives packing.

Our source said “since the latest development, there has been mutual distrust, I learnt that some known personalities in Offa are asking their wives to go back to their people, some who even have marriages that have lasted the whole of three decades are breaking their marital vows and as I speak, many of these women are still in Erin-Ile and lamenting the turn of event and wandering when their husbands will have a change of heart.

The source revealed that the people of Erin-Ile have vowed not to reciprocate.

“My aunt is actually one of such women, can you imagine these women have children for Offa men, but this does not count again, it is very sad,” said a source.

The source also said his cousin, who has been dating an Offa girl for more than three years is now in a state of confusion as her parents have vowed not to give their blessing to their planned wedding.

“Now they’ve gone their separate ways, however, it is not all gloom as two of my sisters who are married to Offa men and live in the Federal Capital Territory and Ilorin respectively have not been sent home,” the source said.

We also gathered that one of the people the Erin-Ile people are holding responsible for this ugly incident is the embattled Olofa of Offa, Oba Mufutau Gbadamosi.

“He is not even the rightful person to that throne, his mum is from Offa royal home while his dad is from Ilemona in Oyun Local Government, again we all know that Offa is landlocked, they don’t have land, that is why some of them will build their homes on a land belonging to them and erect signpost in places like Ijagbo, for instance the signpost will read, Ijagbo Offa. In the real sense, there is nothing like that, Offa is Offa, while Ijagbo is Ijagbo, everyone has its boundary,” our source maintained.